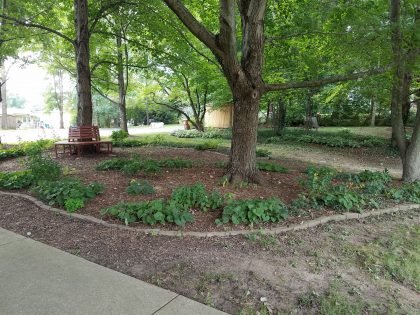 What is it all about?

How did we become certified? When?

What have we done as a committee?

What are current and future plans?

I found out about Green Sanctuary programs within the UUA in 2006 when I attended General Assembly. It is also known as the 7th Principal Project. Being a “greenie” in many ways myself, it sounded so natural to extend my concern for the environment to UUFD. A Green Sanctuary committee was formed in 2007 with 12 interested members. We formed an Action Plan and in the course of one year completed the requirements for certification.

Following an energy audit ways were implemented to save power.

NorthWest Earth Institute courses began to be offered, and continued to be sponsored for 9 years.

An environmental game for children was developed called Web of Life and has repeatedly been used in the Religious Education program and yearly is a feature for the public at MCCD’s Festival Of Spring. It has become one of the most popular games.

The committee started recycling and continues to this day. Composting was tried for a while, but tapered off due to lack of enough material. Also “green bags” were offered and promoted and books were purchased for the Childrens’ Library.

The most successful, long lasting and community outreach program that was started in 2008 has been the Environmental Film Series.Four or more films are procured and offered free each season. The Decatur Audubon Society and the Community Environmental Council help sponsor the films. Discussions follow led by significant persons according to the theme.

Most recently, due to barren areas under our trees, the GS committee has sponsored native shade gardens around our entrance. Called our Tranquility Garden it includes a round-a-tree bench, dedicated to one of founding Green Sanctuary members. A donated birdbath is offered for the birds. Layout, planting and upkeep of the gardens continues as part of GS activies. Considered for the future is sun and butterfly garden with a solar fountain.